Pryzen aims to be the world's most popular self-help video game.

Ever had someone tell you video-games are a waste of time?

This game proves them wrong.

Because while you’re in god-mode, speeding past platforms with a single skill… you’re also improving your career in real life.

While you’re ranking up the ladder & earning brag-worthy achievements… you’re also levelling up your sex life.

You play as Kai –a young musician, transported to a strange land– whose beliefs shape his weapons & skills… as well as the world around him.

He was proud of the vibrant, colorful world he’d created. This was opposite to how he felt a year ago. He remembered the quiet moment in his basement, when his miserable life began to change…

The silence seemed to increase gravity, weighing Kai down.

He stared at the screen in his basement. It’d seen better days.

Coated in a thick layer of dust, it’d been weeks since anyone had cleaned. The once-shag carpet is dull and dreary. The hum-and-click of a heater is almost like a metronome. Pop culture posters covered Kai’s walls, and there sat a small desk with a computer on one side of the musty room. It was flanked by a threadbare couch and a dingy kitchen. Ramen and beer bottles whisper of a failed musician.

Kai hoped that it’d all be washed away, just a footnote to his soon-to-be-glorious career. Ignoring the meager room, he scanned the screen, pouring over the wikis of rockstars. Kai glanced between it and the dark faces of his dour, jaded bandmates.

Kai had a seizure and blacked out.

He awoke on the floor of his basement.

Or did he? Things were very off. Kai’s computer was flickering like a bad sci-fi movie. His posters were almost moving, somehow alive. A strange blue glow spread cloyingly across everything. And then he heard someone knocking.

But a muffled, disembodied voice echoes from outside…

“Welcome to Pryzen, Kai Wheeler, where all dreams go to die.”

How did he go from being an abandoned guitarist, to a celebrated hero in a thriving new world?

Pryzen offers all this and more as it takes players on a journey through a magical world.

And because we live vicariously through Kai’s life and progression, the game covers a wide range of experiences.

And while you’re having fun in-game…

"But Jay, personal development is boring — don't go and ruin a game with it."

Don’t worry, I wouldn’t dream of ruining a game.

Because I love games.

I was raised with three younger siblings and we gamed all day, every day. Atari, Commodore 64, NES, Turbo-Grafx 16, Dreamcast, PSX, Xbox, and more.

When our parents insisted we take breaks, we invented new games at the park.

I immersed myself in games for decades. I know what makes a great game, and I know what ruins them.

My number one priority in this project is to ensure insanely high standards for whatever we create.

The game will be an undeniably fun, appealing, delight first, that blends seamlessly with personal development… or I won’t release it. Period.

Besides, there’s a long list of games that are super-fun but sounded ‘weird’, ‘lame’, or ‘boring’ at first.

Katamari Damacy: “You’re like, this little ball of garbage, that gets bigger as you roll over stuff.”

SimCity: “It’s a game where you build power grids and monitor traffic and stuff, just like a real city.”

Death Stranding: “A courier takes a fetus on his delivery route.”

How did they turn out so well?

Because the creators made sure the games were fun, and they had fun bringing them to life.

Is it a challenge to blend personal development with gaming in a way that doesn’t ruin the game?

But I’ve always believed if we’re not challenging ourselves creatively, there’s no real point.

I'm picky about games —
Is Pryzen for me?

This game isn’t for everyone.

If you’re not comfortable moving a little 2D character from platform to platform, it’s not for you.

If you aren’t up for actually focusing, thinking, and bettering your life, it’s not for you.

If you want a visual-novel style full-length story, this isn’t for you.

And sure, Pryzen is a challenge, but if you want crazy insane levels of difficulty a la Dark Souls, this isn’t for you.

If you enjoy half-chill, half-challenging puzzle-platformers that don’t just make you think, but actually make you better… this is for you.

And in case you have other questions, here’s a brief FAQ.

Is it multi-player?
No, it’s single-player, because the game is meant to impact you deeply and personally, as an individual, at your own pace. But it does have online leader-boards so you can discuss your scores, tips, and tricks with friends.

Is it a platformer, a puzzler, or both?
It’s both. Some levels involve platforming and others are strictly puzzles, but they each impact and interact with each other.

Can I upgrade my character?
Unlike many platformers, you’ll have quite early access to movement abilities. We believe exploring the map should feel quick, easy, and responsive. Instead, you’ll upgrade your character through Pryzen’s proprietary skill-tree, the Belief-Mosaic.

How will it be made?
Using mainly Unity Engine for PC (Windows), Mac, and Linux platforms. It’s meant to be an immersive experience, not something you play with half-attention on the subway.

Will Pryzen be in langauge [X]?
The game will be available in English to start, but hopefully translate to French, German, Italian, Polish, Russian, Spanish.

Will the game have DRM?
It’s DRM-free. (You’ll be able to get it from Steam, and other DRM-free download options will be made available.) 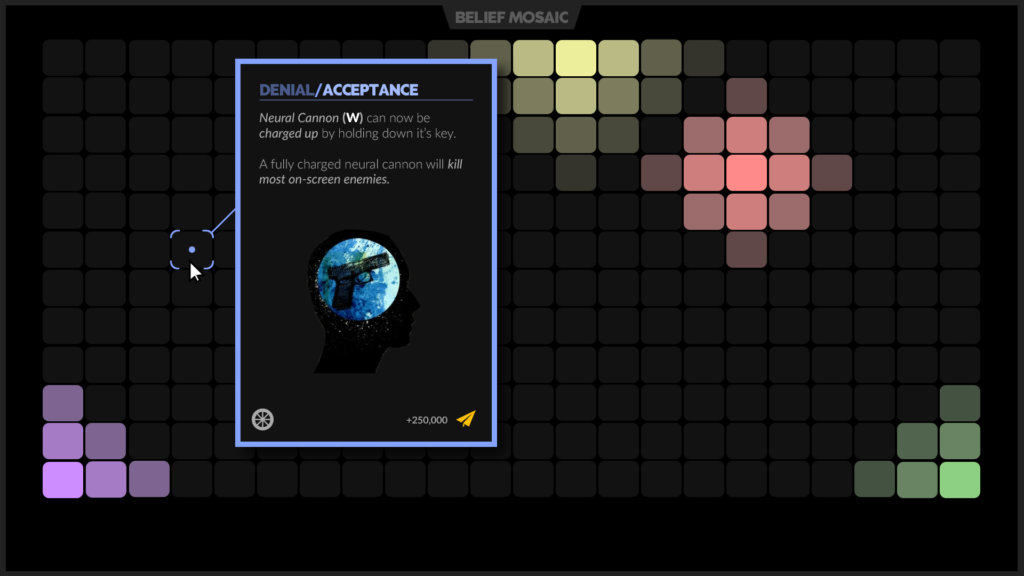 why is a guy who was homeless for years, with no coding background... now making a video-game?

Because during my ~3 years on the streets… internet cafes & games saved my life.

Because even though I had no roof over my head, I was still coaching, advising, and helping clients however I could.

Because I realized that even though people desperately need it…

‘Learning’, ‘education’, and ‘advice’ are treated like poison by most.

But people eagerly re-arrange their lives to squeeze in a little ‘game-time.’

The main way society’s gonna improve now… is through games. First we had the printed word, then radio, then TV. These days everyone and their dog has a YouTube channel, or is moving into Live Streaming.

The future is gaming.

And I intend to be part of it.

But I'd rather not do it alone.

I have a super-rough prototype done so far.

It’s got a menu-screen, a tutorial level, a cutscene, and one personal-development puzzle.

I have a huge vision for what it could be, but honestly… I’m not a coder.

In fact, I’m not even sure how I got the prototype working, lol.

Passion got me through, I guess.

I could really use:

And likely a handful of others I haven’t even thought of yet.

And since I intend for the game to be a crowning jewel, something stunning that people are talking about for years to come…

I can’t just accept anyone.

If, as you read this page, you feel that you’re may be one of them…

Please email me to setup a chat and see how we can make some magic together.

Games are the world’s most fun medium, and it’s time they were used right.

Anyone involved would need to:

Be dedicated to finishing projects.

Have great communication skills, honesty, integrity, open-minded when dealing with others.

Be able to work slightly outside your field to foster collaboration.

Have passion for creative exploration while understanding the need for stability & reliability.

You either step towards your wants, or not.

get what they want…

…by sharing this with others.

Even small actions like shares, help create a better world, if they’re done with the right intentions.

Pryzen is a trademark of Jason ‘J-Ryze’ Fonceca.

Want to try a special Clear Path exercise on one of your wants?

I offer the best tool for breaking down the exact steps towards what you want, for free, below. Check it out.

Click below to get your free Clear-Path sheet below.

The CURE to racism isn't what you think.

Every influencer you know uses THIS SECRET to create winning content.

How To achieve greatness: The REAL work.